Chasing rainbows and living in reality

The first few days after spending a week or so with my family always sucks. I go through the same old emotions every single time. And sadly I feel that being so far from home gets harder rather than easier, especially now when my daughter is old enough to cry and feel sad as well when her Papa and Nene and aunts, uncles, and cousins leave.

So the cycle begins again. I'm always sad and probably a little depressed at first even though in some way I'm always ready to get back to the routine of just living what has become our life. The guilt of being so far sets in for awhile. Guilt that my parents and sisters only get to see their granddaughters two or three times a year, guilt that my girls only get to see their cousins, aunts, and grandparents two or three times a year, guilt that the friends we've made here get to see more of our kids than our own families, guilt that our families are watching our daughters grow up online, guilt of all the small growing up things our families will miss because they six to seventeen hour drive is just too far for a dance recital or ball game or preschool graduation. With the sadness and guilt comes the questions. Are we doing the right thing raising them out here by ourselves? Should we move closer? Where would be the right place to move so we wouldn't be so far and still be close to the things we love so much like the beaches and mountains and big cities? If we were nine hours instead of seventeen would we really see them more or do we all just say that? Is this where we're suppose to be?

Nate and I have always been what I call chasers or probably what some would just call dreamers. I know my family sees us that way. Sometimes I don't even know if we know what we're chasing. The next goal, idea, ambition that pops into our heads. Some people hate change; we go looking for the next change.  But sometimes  as we're chasing down the so called rainbows I worry that we lose sight of something golden that was right where we were standing.

I found what I was looking for when I came out here. But when I look down the road we're now on and I see my children growing up so far from family I'm not sure anymore that that is what I had in mind. I like to think that many people question the road they chose. There are always the what ifs to life. For me this is hard because I've always tried to live my life without the doubt, what ifs, and regrets. I feel that I've done this pretty well. In so many ways I feel the life I'm living exceeded my own expectations, but to be honest I don't know how much thought I put into what my life would like at 30+. But I feel no matter what choices I would have made, two parts of me would have always been at odds with one another. There's the me that has such a deep rooted connection to my family and the Midwest that I love and miss every day and the me that I've become with the man I came out here to begin with, the me or the us that likes the faster paced, go go, barely structured routine life that we live out here in the East. Maybe I could have both one day if I could convince my husband to move west a couple hundred miles, but for now becomes the next step of this cycle I have come to know so well.

Restarting the countdown. Five months until I'm home for Christmas. By then it'll be almost one year since I was home. I have never gone longer than six months since I moved here, and sometimes I think as excited as I have been to finally move out of the city and into the country and smalltown living again in Northern Maryland to an area where I say I can raise my kids, the true reality of  homesickness and having left home for good has really hit me at times this year. I chose this road and I'm okay with that. It's just chasing the things you've always wanted isn't always rainbows and pots of gold.

So for today there is no rainbow, just downpouring rain (literally), a good fit for my depressed mood. But on the good days, which are most days,  when I do reach of the end of the rainbow this is always the pot of gold I am blessed with having. Family. There really is no pot of gold worth more. 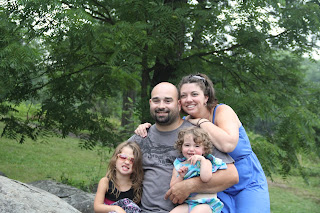 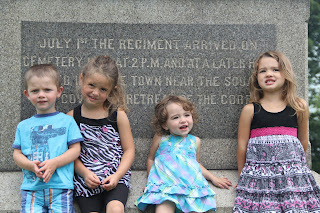 Love seeing my two kids with my sister's two 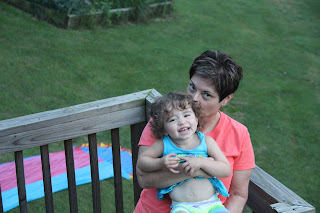 Nene with her Kenzer 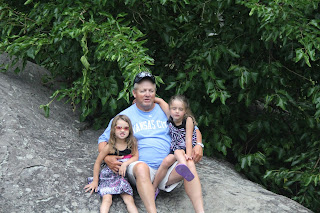 Papa with his two big girls 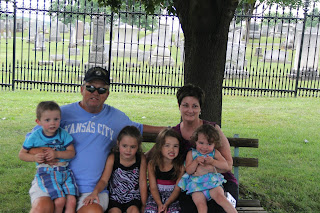 My parents just love being grandparents and love seeing them with all four. 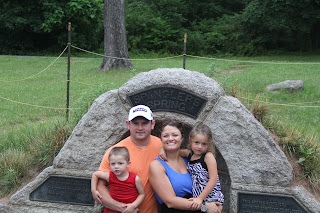 My sister with her family. 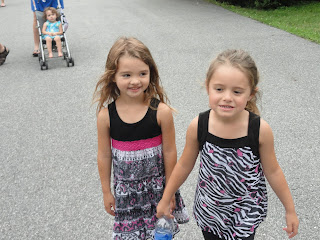 Averi and Addi-Cousins by chance, best friends by choice 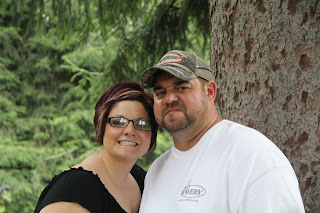 My other sister and brother in law
Posted by Stepping into Motherhood at 4:19 PM