I went back to work this week. Even though the 5:30 alarm sucked and some days the almost hour commute sucked too, I am glad I went back for the end of the year. I was dreading it more than I thought I would, but then once I got settled back into the routine I was really thankful in my decision to do it the way I did. This little test run let me get through that initial anxiety of going back to work after a baby so I can relax now and enjoy my summer without that dreaded first return day back to work hanging over my head. I think now that I went back I'll actually look forward to going back in August more than if I had stayed home straight through from maternity leave to summer.

It will still be an adjustment period for us as the Fall is the busiest, most stressful time of the school year. It will be the first time we're back to two full time working parents with three kids. I will not have a two month vacation coming up in less than a month as I do now as I'm sure that can shape your mental outlook at on things. My husband won't be at home taking care of the laundry, getting up with the baby during the night, and we'll be taking the baby to daycare then (even though with a third baby and an already great established relationship with his sitter that doesn't bother me much). 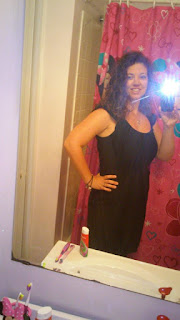 Dressed for my first day back

So even though it's not quite the working mom reality it will be in mid Aug, I am getting a practice run of being back out of the house for ten hours a day. Leaving your baby to work is still hard whether it's your first or third baby. I do still hate the idea that five days a week I'm gone for ten hours a day which only leaves me with about six hours with my baby. That's if he's up until 10. With my oldest this doesn't bother me anymore because she's in school for the majority of that and I'm home just in time to get her off the bus. With my now middle child she needs the engagement and learning she gets at daycare and then she usually wakes up from her nap just as I'm picking her up so again no guilt anymore with working. But leaving my babies that first year or two has always been the hardest for me even though I no longer doubt my choice to be a working mom, and I now know from experience with the other two he'll be in good hands and fine just like the girls were. And the good thing is unlike with my first when I coached volleyball the first two years of her life or with my second when I worked 4-5 extra hours a week at a PT college job the second and third year of her early life, there will be no second work commitment keeping me away from my baby any longer than the typical work day. We maybe finally had a baby we were ready to afford!

Even though I didn't have to get up with the baby I seemed to function pretty well on only about six hours of sleep a night. Guess I figured what was the point in reestablishing a bedtime routine for myself for just three weeks. Only six hours will give me good practice for those middle of the night wake ups in the Fall anyway.  I was also able to still fit in three (hopefully the fourth tomorrow) workouts this week and still drop another pound. I managed to established a pretty good nursing schedule this week, and I got a test run at the pumping situation at work to hopefully continue nursing for at least a couple more months when I go back to work in August.

My husband on the other hand experienced taking three kids to the grocery store by himself. Pretty sure it will be a long time before he lets me talk him into that again. He saw the amazement of how much laundry accumulates in this household. He had everything washed just a day or so ago and now again already there are about four loads at least lined back up in the laundry room. He got to experience the frustration of just falling asleep only to have to get right back up to attend the crying baby. After being stuck as the only one to deal with a crying baby all day and the constant demands of our four year old I think it was day 2 that he told me he was about ready to switch our roles back. It's definitely made it easier to go back these three weeks though with him at home. If I could have a second me, a stay at home husband and working husband (but who really can handle two husbands?), or afford a nanny that took care of my house and my kids when I go back in Aug it would probably make an amazing difference on making my life easier. But I'm not rich, I'm not marrying a second man, and there's already a mini me personality wise in this house so I'm pretty sure we couldn't all handle a second me including myself!

But only one week down at this point and two more to go!

Posted by Stepping into Motherhood at 9:14 PM