Too many people want to cast stones and point fingers these days. It doesn't take an alligator or a gorilla incident for harsh judgments to be thrown on our parenting. To those that either don't have children yet and think it's way easier based on their sideline view or those that think they have perfected parenthood therefore now supposedly have the right to condemn the rest of us for our mistakes take a little walk with me.

See that mom over there that you want to judge. Her child fell and you think she isn't paying enough attention to her children while they play. She's working day in and day out fund raising money to help with her father's cancer treatments and when she's not staying up late doing that  she's accompanying her mother to chemotherapy with her two kids in tow.  She doesn't need your judgment; she needs your empathy.

See that mom over there that you want to judge. Her children spend half their time with sitters and other family and you think she doesn't give her children the attention they need throughout the day. She was up half the night with a fussy toddler before dragging her exhausted body to work for eight hours and then coming home to work on a second job in hopes of finally gaining her family some financial freedom. She doesn't need your judgment; she needs your moral support.

See that mom over there that you want to judge. Her smart curious children got themselves into mischief and you think she is neglectful for the independence she gives her children. She's doing this by herself. She has a full time career and very little help from family. She doesn't need your judgment but she could use your helping hand.

Do you see that mom?  She's exhausted but she's doing her best. She's riddled with guilt at times because the world is more critical than ever before but she stomps it down to put on a face of confidence because that's what her kids need. She lives in fear of what could happen to her children but knows she can't be there with them every little second and her children have to gain independence to survive in this world.

Do you see her? She is everywhere. She is you, she is me. She is doing the best she can. She knows she's not perfect; she knows she's going to make mistakes. She knows her children will get hurt at times. She fears the world out there and the unknown. She just hopes that her mistakes aren't costly.  She prays every night that she will never know a mother's greatest fear of losing her child, and for every one that does she prays for healing and comfort for them too.

She will not judge; she will not condemn. Each journey is riddled with it's own struggles, with it's own mistakes, and the best thing we can do to help each other is offer love and support . 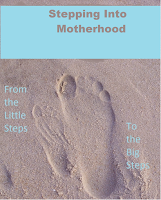 Posted by Stepping into Motherhood at 10:19 PM