Daddy's Adventures in Being the Stay at Home Parent

We are wrapping up the three weeks of my husband being the stay at home parent while I went back to work to close out the school year. He was the one at home and I was the one at work and I'm pretty sure I'm the one, not him,  that got a vacation from this set up.

He was pretty much in charge on the home front with the house and the kids from the time I went to bed at 10 and until I got home around 4 every day. For the first time in months I got to sleep through the night even though I think the first night was the only night I didn't actually wake up and slept straight through. I left pumped milk for him and he took all the middle of the night feedings.
Unfortunately shortly after he'd fall back asleep usually around early morning it'd be time to wake up all three kids to get the oldest up to the bus stop for school so sleep deprivation in the early days of bringing home a baby is no joke he found.

One morning as I was on my way out the door he was complaining of all the milk the baby kept getting all over the front of him from drinking from the bottles. He even pointed out he was getting it everywhere when he felt dampness down by the baby's bare leg beneath his onesie. "Nope, " I said as I headed out the door. "That is shit you just put your hand in. Have a good day, honey!"

When he first started staying home I told him all the things he should do to get a real feel for being the mom at home, but then he went on to tell me if we were switching roles what all I needed to do to be him. I decided at that point maybe we shouldn't switch roles too much. Laughter aside though it did help me realize that even though I feel like I do a lot around the house he does too. However, he did do tons of laundry while home. I have love/hate feelings about his laundry methods. I love that when he decides to tackle laundry he washes pretty much everything in the laundry room and waiting to come to the laundry room. So yay that all the clothes are washed and folded. But he stops there and it's folded laundry covering the basement. No one puts it away and then before too long the kids have knocked all the nice stacks over. None of our closets or dressers are big enough to hold all our clothes if they're washed and who wants to put away that much laundry at once anyway! I organize them in individual piles in the laundry room and when everyone's sick of not having any clothes they'll come get their stack to put away.

He only ventured out twice with the kids while home with them. Once was to the grocery store. The grocery store with three kids! I wouldn't willingly tackle that. Which is why I sent him while I was at work! The girls talked him into one of those big car carts. I think it went okay until about the end when the four year old kept getting out and in the way and into things. Then the baby didn't just start crying but screaming. Then you know how it is. Your sanity is on the brink and you're in exit mode to leave the store as quick as possible with as minimal stare downs as possible.

Between end of the year school activities, doctor appointments, and ball games he was only slightly confused with managing the calendar. He was upset with himself for forgetting to meet our oldest at the bus stop because he forgot I said I had a doctor's appointment. As the one usually rushing home from work to meet the bus and sometimes missing it and already having a plan in place with my daughter and the neighbor if I'm not there it wasn't that big of deal. Nothing like the time he drove clear across the city and got home to only remember I had asked him to pick her up from the daycare near his work (guess that's why you don't change your daily routines). Sorry couldn't help but to share that memory.

A friend of mine said every dad should have a similar experience of staying home with their kids. I asked him what he thought of that and he said he was too old for this and they should have their kids by 23. Course this was about the third week in on limited sleep. This was probably about the same time he asked me whose idea was it to have kids again? He's the one that was pushing for three and even dropped hints about four. I think he's good with three now. At one point he texted me telling me the baby was mocking him. He sent me this picture of him telling me if the kid could talk he would be saying, "I own you. I'm never going to let you sleep again!"


He does look pretty smug and mocking. 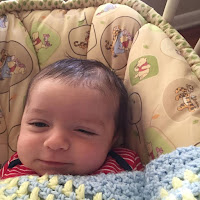 As he was dealing with little sleep for probably the third or fourth night in a row and I was sitting in traffic I reminded him he could be sitting in city traffic on his way to work and his words were, "Sitting in traffic, drinking a coffee and listening to music or being sleep deprived, shit on, and cleaning up milk baths that he decides to give himself...hmmmm...that's a tough one!"

When I asked it I could pose a few questions for him to answer for the blog his grumpy reply was "no comment". I found the past three weeks a very enlightening experience, and I think we'll both find it valuable as we venture into the unknown waters of three kids and two busy working parents in the Fall. There won't be anyone at home to carry the weight on the home front like there's been for the past 4-5 months, and having him there at home definitely made working these past three weeks a lot easier for me and I liketo think while I was home and he was working it made it easier on him. Here's the thing though. Parenthood is hard. It doesn't matter if you're the mom, the dad, a working mom or dad, or a stay at home mom or dad. It's just hard period but it's the best kind of hard there is. I'm pretty sure comment or no comment he'd still agree with that.


I may not do Pinterest worthy things home with my kids but my husband does! Making chocolate strawberries with our daughter! 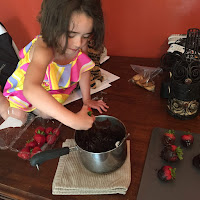 Posted by Stepping into Motherhood at 2:22 PM