Working Towards a Better Healthier Me 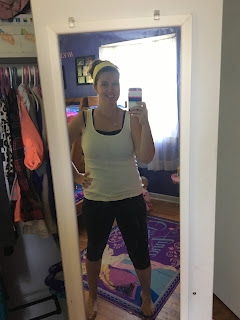 I am going to hit numbers on the scale this month I haven't seen in 3.5 years. It's no big secret I've struggled the past 3.5 years. First with just being in a depressed unhappy rut in my life in which I gained 25 lbs over a year and a half. Then there was the struggle and the back and forth with having a viable pregnancy, and then with nine months of pregnancy the scale starts going in the opposite direction you want. But here I am three months postpartum, and I weigh 20lbs less right now than I did at this point two years ago right before we even started trying for baby #3.

Two years ago when I realized I had gained 25 lbs from my unhappy state of mind I got it in my head I needed to go back to making exercise a priority in my life for my mental health just as much as for my physical health and was determined to lose that crazy weight I gained in the past year and a half at that point, but then shortly after that my focus shifted to getting through a third pregnancy. Now that all that is behind me and I'm approaching 35 in the Fall I am determined once again to get rid of that weight (only five more pounds to go and then may try for a bit more), make exercise a part of my daily life again, and for the first time ever focus on changing my eating habits for the long run. Exercise use to be a part of my life on a regular basis, but then I used the excuse that I'm a mom and have a full time career to put it on the back burner. How I go about my eating is something I've never made a conscious choice about, but I've been set on cutting back the sugar I eat and eating more fruits and vegetables than I have in the past. For the most part I've been pretty successful with that for the past three months. Even my husband has gotten on board with me with that, and has quit buying his coke.

I've been getting in five workouts a week the past few weeks. I'm going on my fourth month of being more mindful of my eating and working out 3-5 times a week. The Fall is going to be the real challenge though. But I think I have it in my head if I can keep making this a priority, even as crazy as everything else may get at times with being gone ten hours a day, a baby to take care of, and two older kids in activities, making the time to work out can be the thing that mentally keeps me in a positive place to balance it all. I've already made the working out a habit. A habit I'll have for four months by then so I'm hoping knowing I already put in four months worth of work and made progress that it will be what motivates me to keep at it.

Eating better I've found too is a huge plus in feeling physically better. Eating poor I've learned makes you feel so bloated. Besides my setback with vacation I'm down to just having the occasional soda as a treat. I've had it twice in the past 2.5 weeks. I still like my ice cream probably at least once a week. The rest of the sugary stuff I've been avoiding pretty easily. Haven't been to any parties with some good cake recently but if it has butter cream frosting I'm sure I'll be eating it. One of the best pieces of advice I've been given about making a change with what I eat is the 80/20 rule. Eat healthy 80% of the time and the other 20% can be for those snacks and meals that are just oh so good but not so great for your health. Honestly, I'm probably eating more on a 75/25 ratio right now. If I can avoid my 3:00 after work sugar attack I should actually be able to do better with my eating in the Fall.

So I'm happy so far with the progress I've made but lacking confidence in myself to stick with it consistently enough in the Fall when I return to my "real" life. I want it all this Fall. My career with the little projects I'm looking forward to taking on this school year, valuable time with my family, and time for myself with fitness and my writing. But something always seems to have to give, and I don't want it to be any of them. They're all important but we shall see how the reality plays out starting in mid August. That will be when the real truth of this goal of mine begins.

Past Posts on my Journey to a Better, Healthier Me


Posted by Stepping into Motherhood at 10:36 AM