The comedy of errors of everyday life with A & N

Somehow our parenthood adventure always tends to be comedy of errors. And this week was no exception. We all survived, but it was NOT pretty at times. There are definitely no parenting awards over here. Oh, and since I'm writing this and Nate's not, I'm going to blame everything on him.

So where should I start? There was Monday night while  I'm cleaning up the dishes and feeding the dog, I hear Nate holler from the bottom of the basement steps. And at the bottom of them was poor Kenzer bawling her eyes out because who knows how many steps she toppled down. She wasn't feeling well as it was so she cried and she cried. But she let me rock her to sleep so that was the positive of her falling down the stairs.

Tuesday. Oh, Tuesday, that was the day that because Nate had a paper due Wednesday we came home between work and gymnastics so we could drop him off. So I was using that thirty minutes to read on my phone. And I think he was having his man period or something that day because he starts getting all pissy that I'm reading and ignoring everything, which I do do when I start reading, which is why I never read anymore! Well, you put a PMS male with PMS female and you have a whole lot hot tempers flying around. Needless, to say we didn't make it to Averi's gymnastics because I thought by the time I drove the twenty minutes there less than half of it would be left so I took Ave and Kenz to the park to get away from so called PMS man. Park was fun. Besides the fact that I forgot that little math/physics whatever it is equation where you shouldn't put two totally different weighted people on a see saw because the light one-in this case Averi-would flip right off. But mama saved her. That's right. I caught her and told her that was not a good idea and she needed to find a younger park friend that didn't outweigh her by 30lbs. And this is where things getting pissed on just started taking over my week.

I made the mistake when she was little and there were no potties around about letting her just go outside. WE pulled the car over on the side of the road once for her to go outside. But now she thinks it's okay to just walk away from the playground and find a nearby tree and drop her drawers to go. Except she picked a tree where her bare butt was facing the parking lot. Well, so no judgments here people, I directed her over to the tree clear across in the other direction farther away from the playground. Sorry, but the other option was the porta potty. And I would go stand behind the tree to go before going in one of those things so I was NOT sending my four year old in there. What if she fell in?!? I have weird paranoia about that.

The next morning Averi wakes me up crying of an ear ache. So I took the day off to take Kenzi to the doctor. Yeah, you read that right. Averi was fine, I already had the day off, Kenz had been coughing something awful for over a week so I took her to the doctor to find out the poor kid has an upper respiratory infection and needs antibiotics. Ave talked me into getting them bubbles and a pool on the way home. And she's in the house with the bubbles and I remember telling her to make sure she puts the lid on them because Kenzi is always knocking them over or spilling them. I go back to my room and am checking a message on my phone and I hear Averi go, "whoops". I look up at the same time my foot hits the wet slippery mess on the floor and down I go. Averi of course tries to clean up, I go to get something, and what do you know. Feet over head goes Kenzi on the floor. That was the day they both magically fell asleep at five though and I TOOK A NAP!!! Except when Nate got home from class then they were wide awake, and I remember at one point they were running around playing and being their usual loud, over energetic selves, the dog was barking, the TV was blaring, and Nate and I looked at each other like "Yep, welcome, to the nut house!"

Thursday morning I woke up thinking maybe I had peed my pants. My whole backside was soaked. I just figured i must have sweated really bad. It wasn't until I went to get Averi out of our bed that I realized no she peed all over everything. She hasn't wet the bed in forever and she just slept through it! How do you do that? Oh, wait, I slept through laying in her pee too. Being that I have to be at work too damn early, I did not take a shower, my husband reminded me way more than he should have in my bitchy mood that I smelled like pee. (Course he thinks everything has a bad smell) I get halfway to work to realize I forgot to give Kenzi her medicine and from there for the rest of the day I was mad at the world. I'm pretty sure I restarted the argument again from Tuesday on the way to work so by the time I got to work I was in need in one of my mommy timeouts (I seem to need those a lot this year).

Come Friday, Averi attempted to potty train Kenzi. She was really set on this. "I put her in underwear, Mom. Don't worry. I'll take her when she has to go."She didn't quite get that Kenzi doesn't know yet when she has to go. I'm just glad when Kenzi decided to pee herself she did it on Averi's bed so now it's Friday night and everything has been peed at this point and now I have a bulkier, larger amount of laundry to do this weekend. Then that darn medicine again. Our life has had like a theme this week-pee and antibiotics. I was going to fill the dropper for Kenz's medicine and the darn thing fell down in the bottle. And I couldn't get it out so I went back to our bathroom to get the tweezers to pull it out and walked in on Nate doing what boys do when they sit on the potty. (I thought he was downstairs watching hockey in my defense!) And here's how our week ended:

I always have to have the last word. HAHA! TGIF!

Averi did learn how to rollerblade this week though! 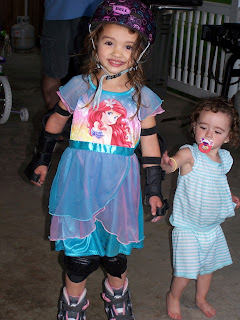 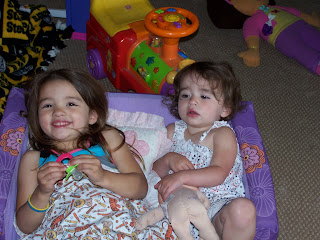 Testing out the pool 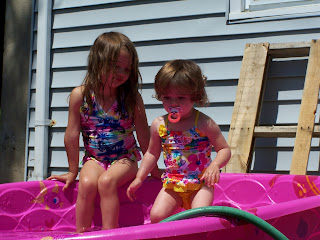