Reveille would often sound shortly after six in the morning. The rising sun would already be peeking its way through the closed blinds. If we didn't get up by the time he sounded reveille again, the next thing would be ice cold water poured into our beds. It rarely came to that though. We were usually too pumped up for the day ahead at the ball fields. The ball bags, equipment bags, and cooler were already packed and loaded in the car the night before in preparation for the early morning. We'd leave shortly after sunup and return home around sundown covered in dirt, sweat, and a fresh sunburn. The three of us would fight over who got to shower first, and when we were finally able to get in there, it always felt like the greatest shower ever. Most Saturday nights as our heads hit the pillow we'd be out before the last of the sun completely disappeared, and we'd be back up at it Sunday morning.

"That was our family weekend every single weekend from the end of March until the middle of July for ten years. Then we'd be back at it from mid August until mid October when your aunts and I were older in high school," I told Averi. "The first thing I think I ever loved besides people was this game. There was a point in my life where I truly couldn't imagine my life without it."

My senior year of high school Mrs. Green, one of the hardest and best English teachers I ever had, loved the identity essay I wrote about leaving behind that game as I was getting ready to graduate and move on from one chapter in my life to another. I wish I could find it somewhere in the mass amount of old essays and papers I kept as it'd be a great reference now to how I had hoped to one day connect my past with my love for this game to my future.

Even though I coached three seasons, it just wasn't the same. However, getting Ave interested in the game and going to her first ball game yesterday, brought back the rush of all my great childhood memories on the ball field. Maybe it was family and my teammates just as much as the game itself that made it such a monumental thing in my childhood.

I've always said softball/baseball doesn't have to be their chosen activity. I want them to just find something that teaches and drives them. I want them to have something that will teach them about faith. Faith in the teammates that will have their backs, faith in themselves as they will have moments of triumph and struggle. I want something that will teach them about unity and teamwork. Softball was the first thing to teach me I had to trust my teammates to do their job of fielding the ball behind me and getting the hits to score just as I had to learn to be the person they could count on as well. Then whether it was their mistakes or my own, we all had to learn the idea of we win together, we lose together. As a student I never struggled much in school (except for that one math class!) so  softball was the first thing to teach my how to overcome frustration, how to push forward without quitting, how to push forward over others'  and even my own doubts and criticisms. As much as I loved winning and was and can still be competitive, it's also where I learned sometimes it wasn't about whether we win or lose but more so how we played the game.

Almost every day Ave asks if I'll throw her the ball so she can practice hitting. Unlike her three year old experience as a soccer player, she did really well yesterday for her first game. She hit the ball two out of three times without the tee (they get four live pitches to attempt to hit before they give them the tee), she fielded and threw one ball to first, and she was always moving towards the ball when it was hit. Again today she asked me to go out with her. She hit it a few times but was missing more than hitting it. She started getting frustrated with herself. We agreed she should end on a hit, and she did. As I was picking up she was sitting in the grass with her bat in her loose hands, and she was hanging her little pink helmet head. I sat down beside her and told her even though she was upset that she didn't hit as many balls as she wanted to, she listened to the advice/coaching I gave her and she kept trying and trying. She did improve her swing and she did hit balls. And she's only five. I didn't hit without a tee until I was around seven.

"Play the game because you love it, Ave. Play it because you love sharing the game with people you love, whether its me, Dad, your sister, or your teammates. This game can teach you many things, but don't let the rough moments get you down because sometimes those moments are part of  where you'll learn the greatest things."


And maybe this is the beginning of a another childhood spent on the ball diamond. 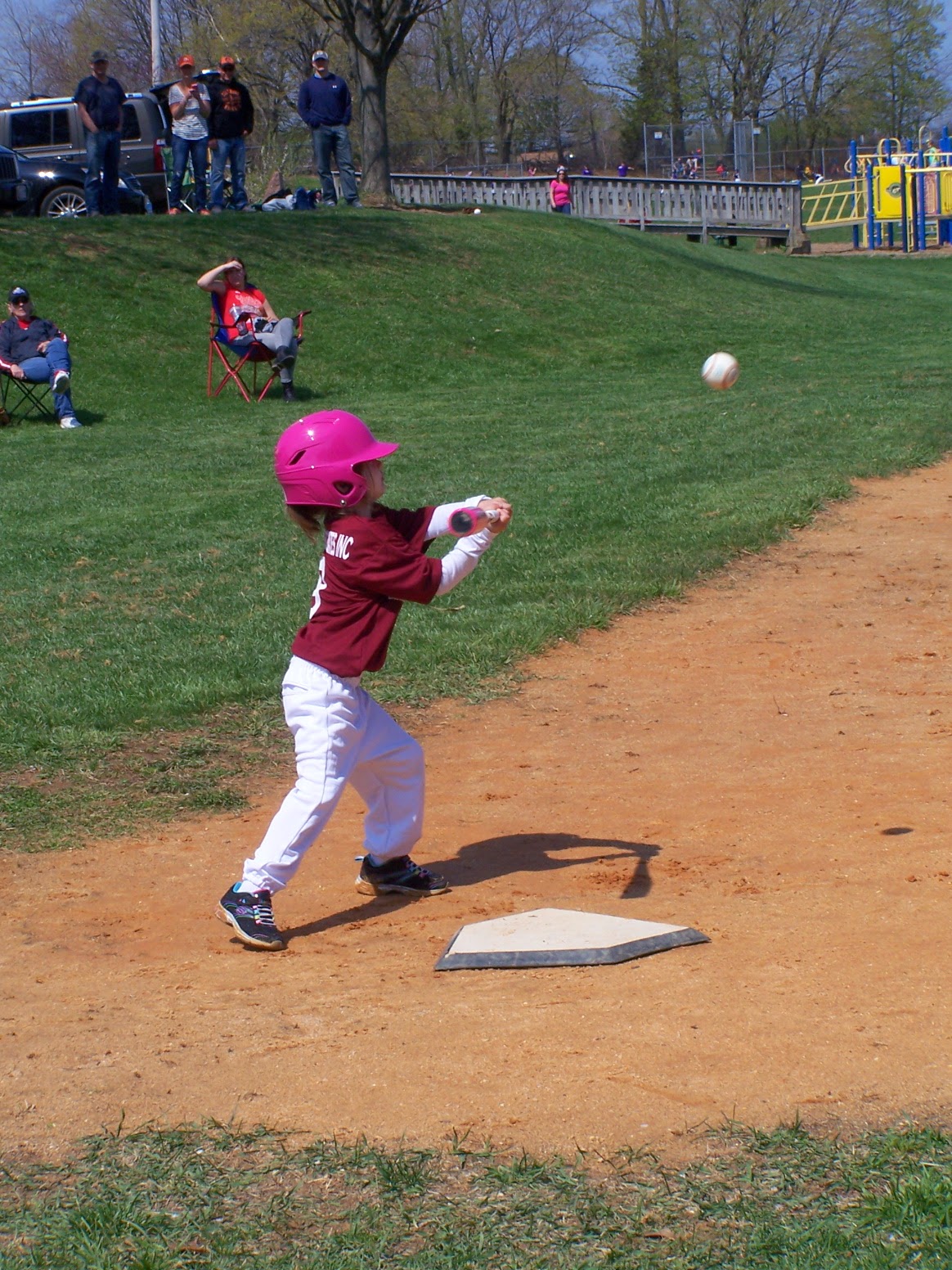 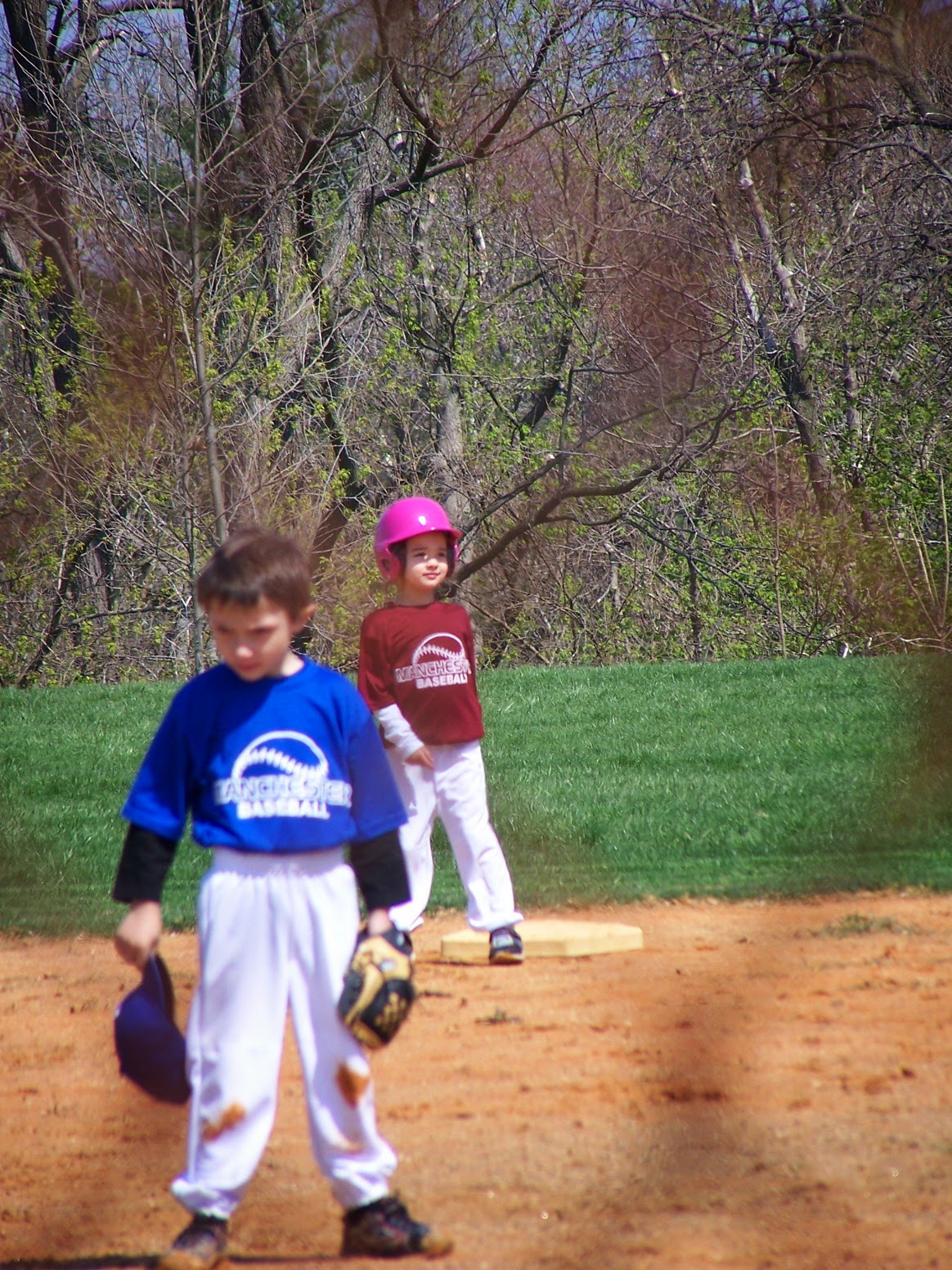 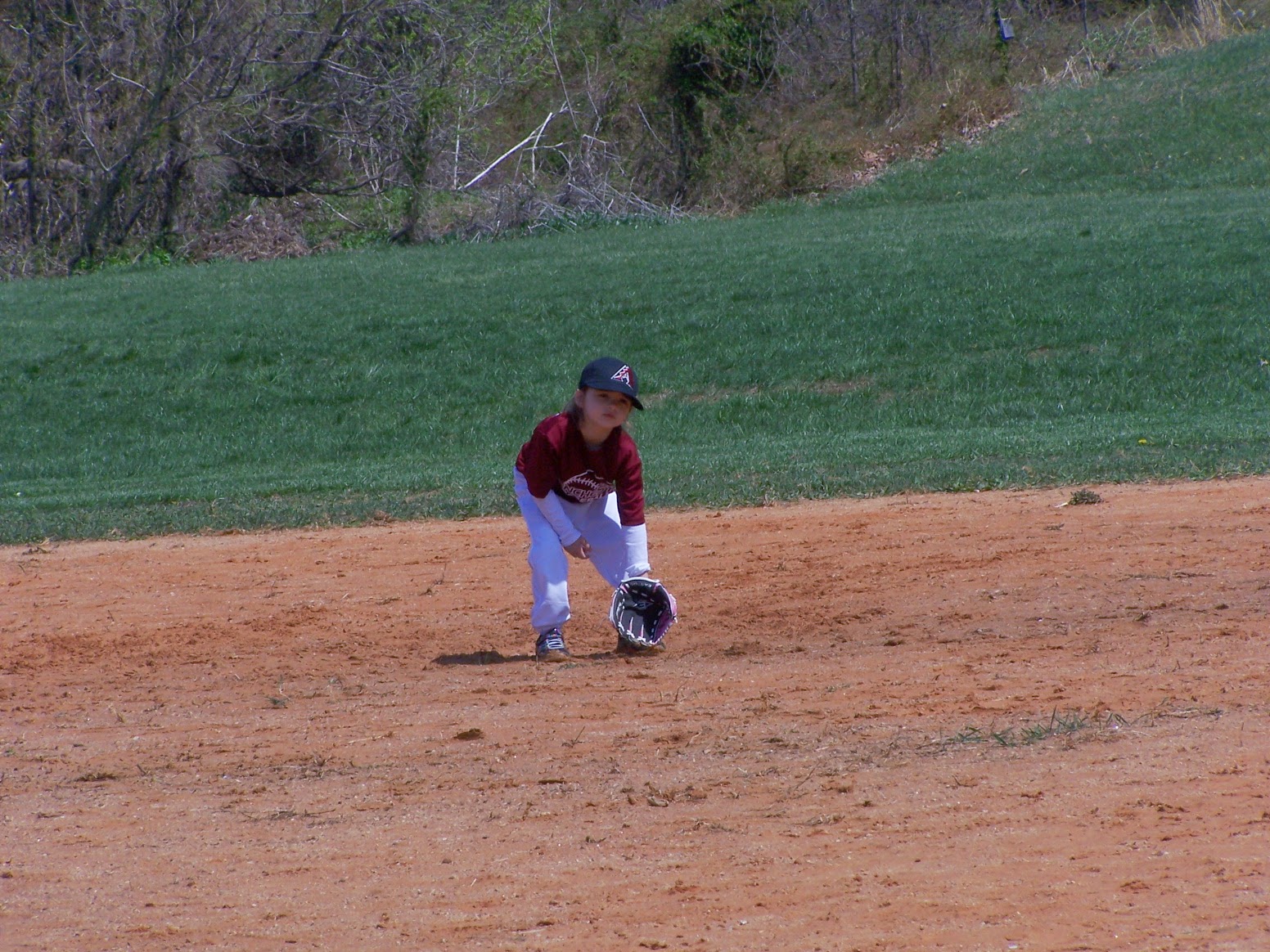 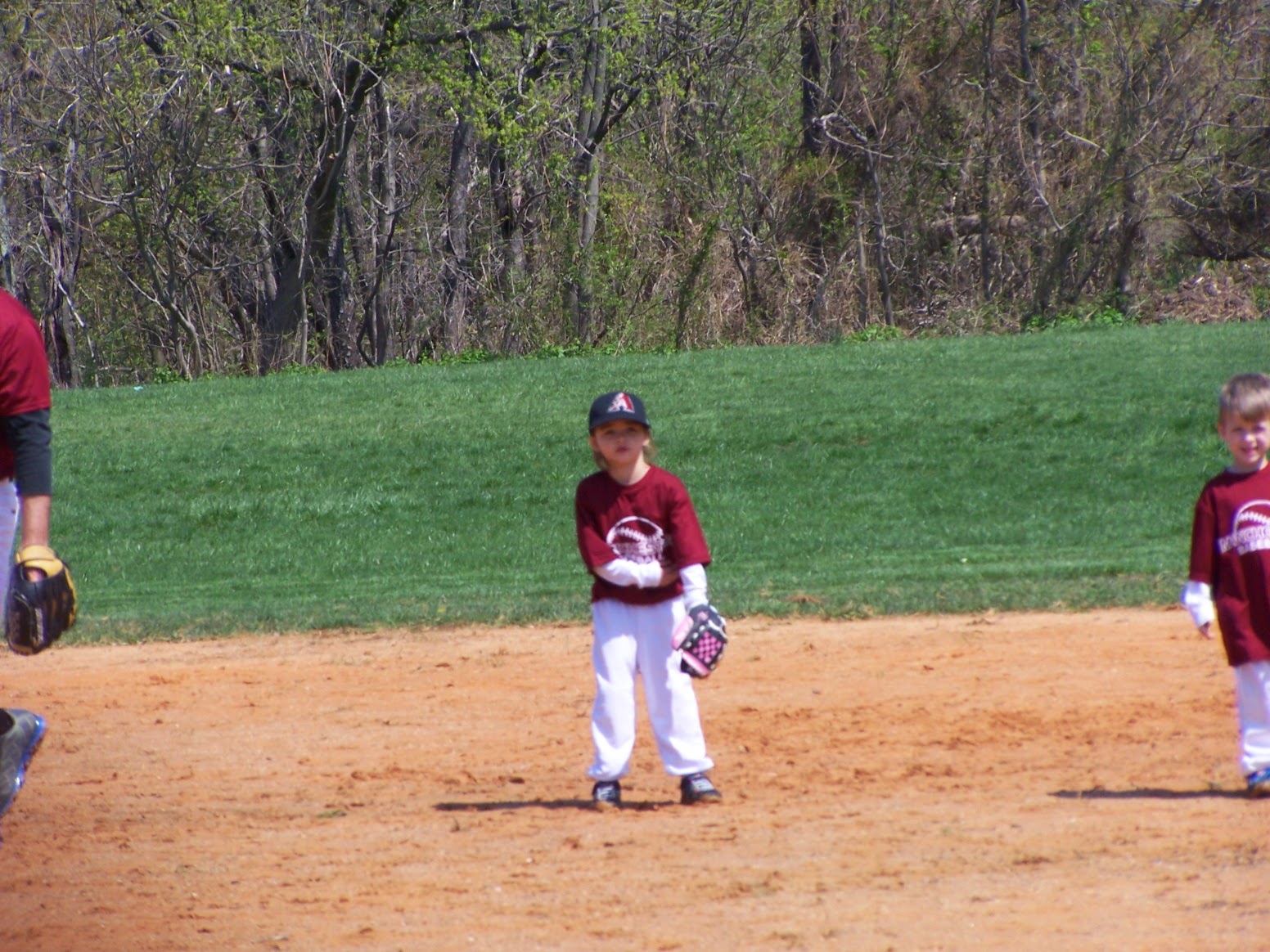 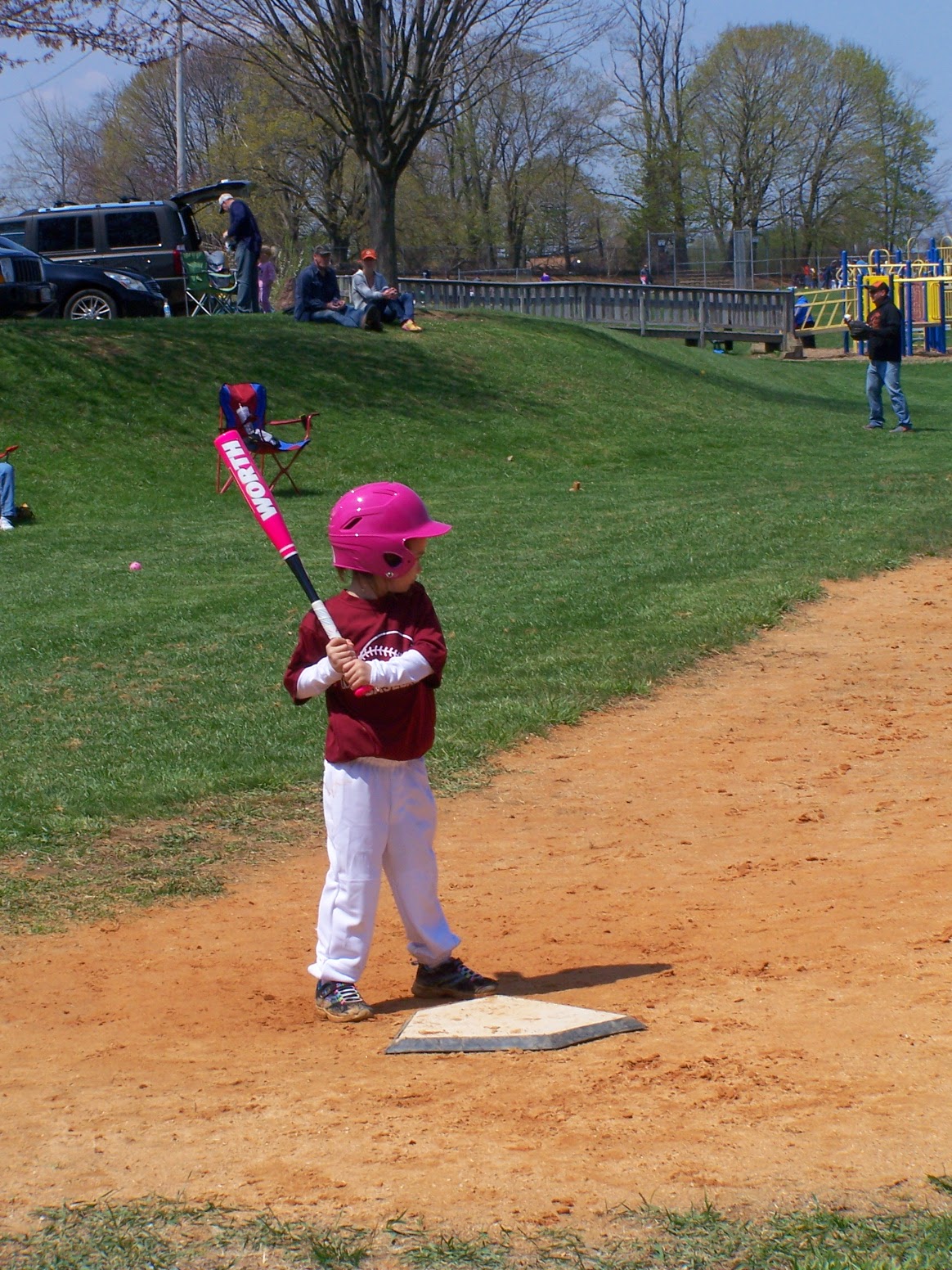 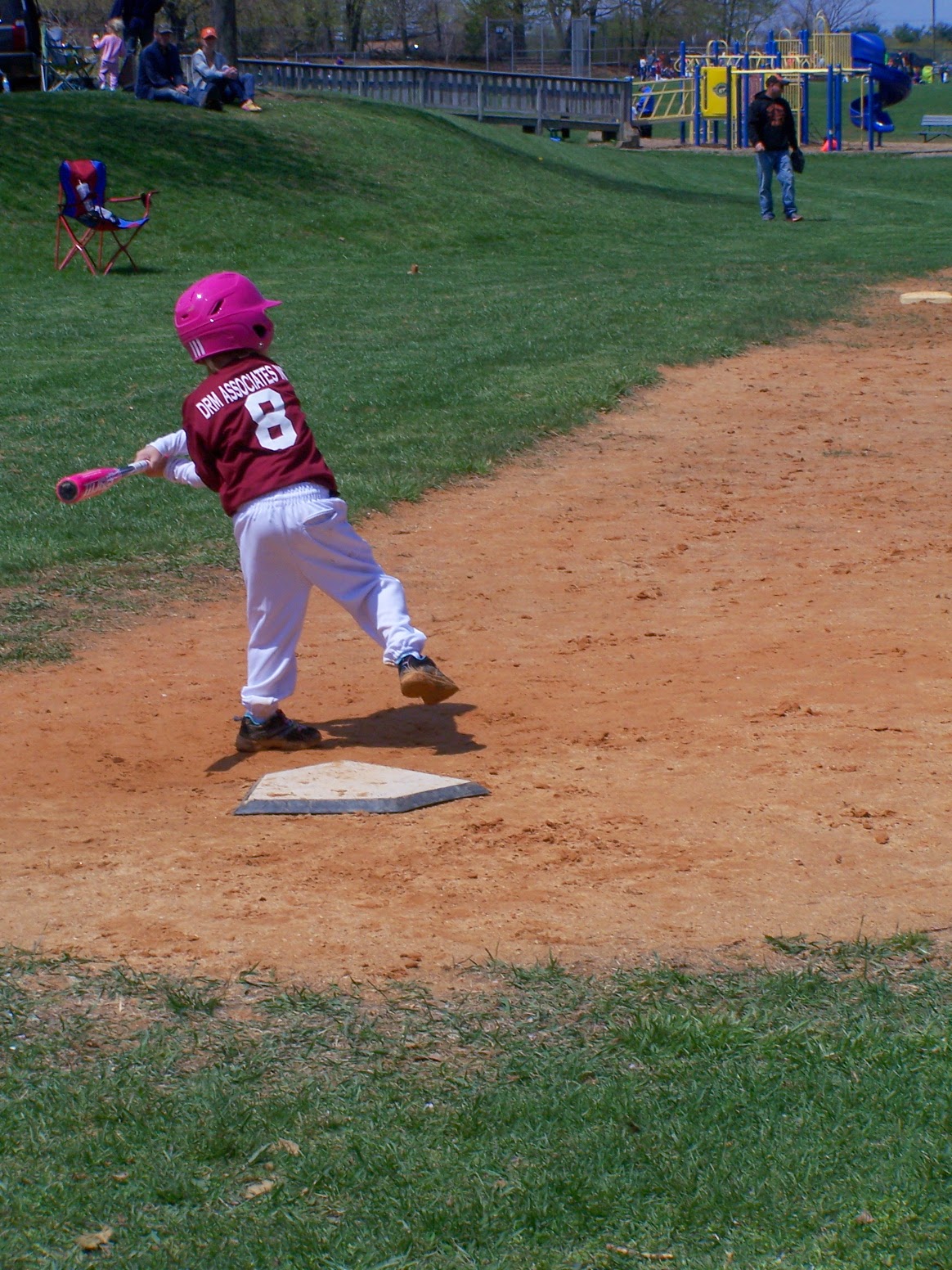 My other baseball/softball post near and dear to my heart

You Can't Score if You Never Swing

Hey, Coach, You Missed the Call

Posted by Stepping into Motherhood at 8:10 PM